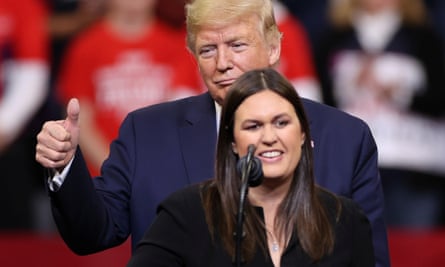 Donald Trump told Sarah Sanders she would have to “go to North Korea and take one for the team”, after Kim Jong-un winked at the then White House press secretary during a summit in Singapore in June 2018.

“Kim Jong-un hit on you!” a delighted Trump joked, according to Sanders’ new memoir. “He did! He fucking hit on you!”

Speaking for Myself will be released next Tuesday.

Rather than a tell-all by a former staffer or a burn-all by a hostile family member, the book is a paean to the president by a loyal follower with the subtitle Faith, Freedom and the Fight of Our Lives Inside the Trump White House.

Sanders is from a notable Republican family – her father is Mike Huckabee, a candidate for the presidential nomination in 2008 and 2016 – and reportedly has her eye on a run for governor in Arkansas.

Source: Trump told Sarah Sanders to ‘take one for the team’ after Kim Jong-un wink | Donald Trump | The Guardian

Washington (CNN) Ohio Gov. Mike DeWine announced on Thursday that he has tested positive for coronavirus.

The announcement came shortly before DeWine, a Republican, was scheduled to meet with President Donald Trump in Cleveland.

DeWine was tested as part of the “standard protocol” to greet Trump on the tarmac at Burke Lakefront Airport, the governor’s office said in a statement. He is returning to Columbus, where he and his wife Fran will both be tested.

DeWine tweeted Thursday that he’s not experiencing symptoms at this time.

Larry Householder: What we know about the $60M bribery investigation

COLUMBUS, Ohio —The arrest of Ohio House Speaker Larry Householder (Republican) and four others Tuesday involved $60 million, a racketeering and bribery investigation, a nuclear plant bailout, and one of the largest money laundering cases in the state’s history.

There are many moving parts to the complicated investigation. Here are the basics:

The federal investigation was launched about a year ago and eventually included secretly taped conversations, bank statements, text messages and other documents to show scope of the complex conspiracy.

Source: Larry Householder: What we know about the $60M bribery investigation

There’s a Bigger Prize Than Impeachment

Keeping Trump in office will destroy the Republican Party.

For Democrats, leaving Donald Trump in office is not only good politics — it is the best chance for fundamental realignment of American politics in more than a generation. Mr. Trump is three years into destroying what we know as the Republican Party. Another two years just might finish it off. Trumpism has become Republicanism, and that spells electoral doom for the party.