From pandering to Putin to abusing allies and ignoring his own advisers, Trump’s phone calls alarm US officials – CNNPolitics

(CNN) In hundreds of highly classified phone calls with foreign heads of state, President Donald Trump was so consistently unprepared for discussion of serious issues, so often outplayed in his conversations with powerful leaders like Russian President Vladimir Putin and Turkish President Recep Erdogan, and so abusive to leaders of America’s principal allies, that the calls helped convince some senior US officials — including his former secretaries of state and defense, two national security advisers and his longest-serving chief of staff — that the President himself posed a danger to the national security of the United States, according to White House and intelligence officials intimately familiar with the contents of the conversations.

The calls caused former top Trump deputies — including national security advisers H.R. McMaster and John Bolton, Defense Secretary James Mattis, Secretary of State Rex Tillerson, and White House chief of staff John Kelly, as well as intelligence officials — to conclude that the President was often “delusional,” as two sources put it, in his dealings with foreign leaders. The sources said there was little evidence that the President became more skillful or competent in his telephone conversations with most heads of state over time. Rather, he continued to believe that he could either charm, jawbone or bully almost any foreign leader into capitulating to his will, and often pursued goals more attuned to his own agenda than what many of his senior advisers considered the national interest.

Source: From pandering to Putin to abusing allies and ignoring his own advisers, Trump’s phone calls alarm US officials – CNNPolitics

John Bolton’s Big Paycheck For His Book May Be In Jeopardy : NPR

John Bolton reportedly received a $2 million advance for his tell-all book about his time as President Trump’s national security advisor, and if it sells well, additional royalties could follow.But a judge’s ruling has raised questions about whether Bolton will be allowed to keep the money for his work, entitled The Room Where It Happened.

U.S. District Court Judge Royce Lamberth on Saturday rejected the Trump administration’s attempt to block the formal publication of the book on Tuesday. He noted that news organizations already had copies, hundreds of thousands were at warehouses about to be shipped, and Bolton was giving interviews.

Source: John Bolton’s Big Paycheck For His Book May Be In Jeopardy : NPR John Bolton is a weasel for not telling the truth about President Trump when it might have mattered — at least, theoretically. In practice, however, Bolton’s coming clean wouldn’t have mattered at all, since Bolton’s fellow weasels — Republican senators — were never going to remove the Head Weasel from office. That was always going to be our job.

I’m using the word “weasel” in the dictionary sense of “a deceitful or treacherous person.” Sen. Mitt Romney (R-Utah) is excepted because he, alone, put duty above party loyalty in voting to convict Trump during his impeachment trial. The rest of the GOP Senate caucus chose to maintain the tragic fiction that Trump is fit to exercise the vast powers of the presidency, even as these cravens know that to be untrue. Imagine how different things might be today if all senators, and not just Democrats and Romney, had upheld the oath they took to judge Trump impartially in his impeachment trial.

Among Republicans, only Romney and Susan Collins of Maine voted — in vain — to hear what Bolton, Trump’s longest-serving national security adviser, had to say. Bolton also could have told his story in the House of Representatives, which formally asked him to testify. And at any time, of course, he could have simply called a news conference and spilled the rotten beans.

Source: John Bolton is a weasel in a party of weasels – The Washington Post 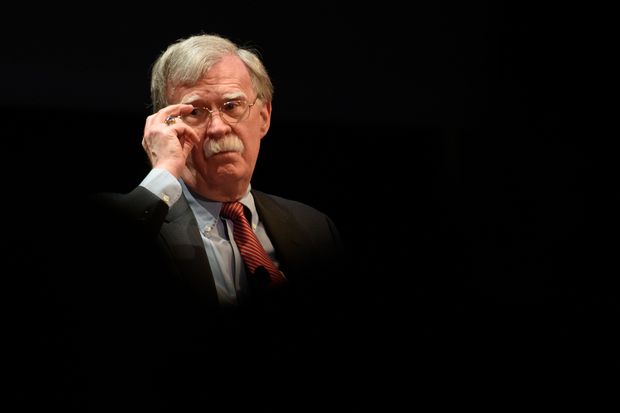 WASHINGTON—President Trump’s decision-making consistently prioritized his re-election and his family’s well-being ahead of the national interest, according to a new book from his former national security adviser, John Bolton, who describes “obstruction of justice as a way of life” inside the Trump White House and denounces what he says is the president’s penchant to “give personal favors to dictators he liked.”

In a scathing account of his 17 months working for the president, Mr. Bolton describes Mr. Trump as “stunningly uninformed,” easily swayed by authoritarian leaders and often the subject of scorn among his own advisers. Among the episodes he recounts are June 2019 meetings with Chinese President Xi Jinping in which he says Mr. Trump pleaded with his counterpart to help him win re-election by purchasing agricultural products from the U.S. and gave China his blessing to continue building camps for Uighur Muslims, which Mr. Bolton likened to concentration camps.

Mr. Trump broadly defended his handling of foreign policy issues in an interview, including his decision to reverse penalties on Chinese companies as part of his trade negotiations. He denied giving Mr. Xi approval for Uighur camps in China and sharply criticized Mr. Bolton.

Donald Trump and Attorney General Bill Barr don’t want John Bolton’s book to see the light of the day. And now they are threatening to go to court to try to stop the release. The former national security adviser’s book “The Room Where It Happened: A White House Memoir,” is set to be in bookstores a week from today. The book has already been delayed since March, reportedly due to the review process. ABC News reports the Trump administration could file a lawsuit as soon as today “in federal court seeking an injunction to block the book from being released in its current form.”