A second set of social media posts casts doubt on Ted Howze’s claim that another person gained access to his accounts.

WASHINGTON (AP) — The Senate is poised to vote Thursday on the nomination of Texas GOP Rep. John Ratcliffe to be Director of National Intelligence, potentially confirming him sooner than expected, as senators are eager to quickly fill the post.

Democrats have been opposed to Ratcliffe’s nomination, and most are expected to vote against it. But they dropped their usual objections to holding a quick vote as members of both parties want a Senate-confirmed nominee in the job. Democrats usually force procedural votes that slow the nomination process, but are allowing a quick vote Thursday before the Senate leaves town for the next week.

WASHINGTON (AP) — The number of Americans applying for unemployment benefits in the two months since the coronavirus took hold in the U.S. has swelled to nearly 39 million, the government reported Thursday, even as states from coast to coast gradually reopen their economies and let people go back to work.

More than 2.4 million people filed for jobless aid last week in the latest wave of layoffs from the outbreak that has triggered nationwide business shutdowns and brought the economy to its knees, the Labor Department said. That brings the running total to a staggering 38.6 million, a job-market collapse unprecedented in its speed.

The number of weekly applications has slowed for seven straight weeks, and last week the figures declined in 38 states and the District of Columbia. Yet they remain immense — roughly 10 times the typical figure before the crisis struck.

US expected to withdraw from another major arms treaty 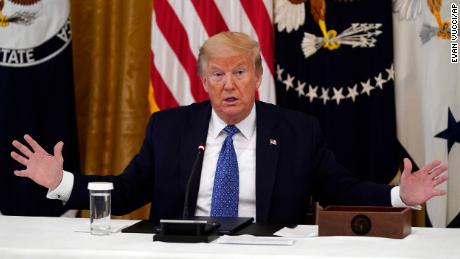 Washington (CNN)The Trump administration is preparing to withdraw from the Open Skies Treaty that was designed to reduce the risk of military miscalculations that could lead to war, making it the latest major arms control treaty that the US will abandon under President Donald Trump.

An announcement could be made tomorrow, an administration source tells CNN.
The treaty which was signed in 1992 allows member countries to conduct short-notice, unarmed, reconnaissance flights over the others’ country entire to collect data on military forces and activities.
It was part of a broad web of arms control agreements meant to ensure stability and predictability on the European continent and reduce the risk of misunderstandings that could spiral into conflict by ensuring transparency.
The New York Times was first to report a final decision has been reached.

Source: US expected to withdraw from another major arms treaty – CNNPolitics

America has the most confirmed coronavirus cases in the world. “I view it as a badge of honor,” President Trump said, noting that “it means our testing is better.”